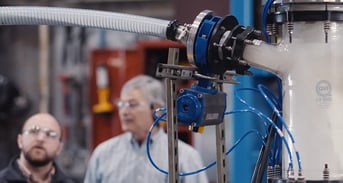 In almost any manufacturing operation that involves handling solid materials such as powders and dust, several potential hazards to both personnel and equipment can occur. These hazards have been well documented and significant regulations and guidelines have been established to help minimize their occurrences.

The potential risks of these hazards range from a lost time accident due to muscle strain (caused by manually lifting, carrying and emptying containers of material) to more serious injuries, including loss of life and significant damage to buildings and equipment as the result of a dust explosion.

Some hazards are more obvious than others because of the material(s) and process(es) involved, and while it is difficult to cover every possible way that something can go wrong, we’ve put together an overview of some of the more common issues that Operators and Engineers should be aware of and address when handling solids.

Physically handling containers such as bags or small drums of material can result in physical injury from the effort itself, along with the risk of trips and falls, especially when materials must be carried up stairways. If possible, bags or drums should be moved via a manual or motorized forklift and transferred to higher levels using a properly designed lift or elevator.

Almost any material can create a flammable mixture when particles of it are suspended in air at the right concentration. If that happens, it is important to prevent an ignition source from occurring. Open flames and sparks from electrical devices are relatively easy to address, but accumulation and discharge of static electricity can be more difficult to prevent. Many people are not aware that a static discharge as low as 5-10 milli Joules (mJ) is sufficient to ignite some materials (for comparison, an average static shock when touching a doorknob in winter is around 30 mJ). One way to help prevent static build-up is to use conductive, anti-static or static dissipative materials whenever possible when handling solids. Even when that is done, the system components should be electrically grounded to provide a discharge path for static charges that may accumulate on isolated surfaces. Anti-static soled shoes for Operators and electrical ground monitoring systems are examples of additional methods that help prevent static discharges. National Fire Protection Association (NFPA) Standard 77, “Recommended Practice on Static Electricity” provides detailed practices and procedures to specifically address this issue when handling powders and dusts.

A common step in chemical manufacturing processes is the addition of solids into a reactor or mixing vessel with flammable solvent that is inerted with nitrogen. Frighteningly, it is still relatively common to hear that this step is being accomplished by simply pouring the solids into a vessel through an open manway. This practice results in exposing the nitrogen blanket (and its saturated solvent vapors) to the oxygenated air outside the vessel which can result in an explosive mixture of solvent vapor and air near the open manway. When solids are then poured into the vessel, static charges can accumulate on the container and the falling particles, which under the right conditions, can result in an electrostatic discharge. Unfortunately, this scenario has occurred more than once and resulted in serious injury to Operators including at least one fatality.

Along with manual transfer, there are two other primary methods of conveying solids from their initial containers to the process equipment where they need to go; mechanical and pneumatic. As previously mentioned, almost any powder or dust can form an explosive mixture with air given the right (or, in this case wrong) circumstances. Generally, those conditions require a relatively low concentration of dust particles in an oxygenated air stream. If a spark occurs that exceeds the Minimum Ignition Energy (MIE) of the dust cloud, then a deflagration or explosion can possibly occur. The primary risk with mechanical systems is sparking due to contact between metal components (this typically occurs in an upset condition) or high surface temperature due to friction or a malfunctioning electrical device. Pneumatic conveyors tend to have fewer moving parts, but the powder is contained within an enclosed conveying line. The primary risk then becomes electro-static build up on the conveying line wall due to friction between the particles and the wall, and the particles themselves. If the conveying gas contains oxygen, and the particle concentration is just right, and a strong enough static discharge occurs, then the mixture in the line could ignite.

Some of the most deadly and damaging accidents involving dust explosions have been caused by poor housekeeping. Numerous videos prepared by the “Chemical Safety Board” (CSB) that describe the causes and results of these incidents (such as the Imperial Sugar Refinery event in 2008) can be found online. One of the main points of emphasis in the CSB’s findings was that fugitive dust often accumulates in areas and on surfaces that are hidden from view. It is this hidden material that often becomes dislodged due to a relatively minor primary event and then creates a much larger secondary dust cloud and explosion. While the “Occupational Safety and Health Administration (OSHA)” currently has no specific codes regarding control of dust and debris in the workplace, regulation of it can occur under their “General Duty Clause” and a “National Emphasis Program” that was established to address combustible dust housekeeping. There are also several NFPA Standards including 61, 65, 68, 69, 70, 91, 484, 652 and 654 that provide both general and industry specific guidelines and practices for dealing with combustible dusts.

De Dietrich Process Systems knows workplace safety is a critical concern in any powder handling application. Our Powder Pump system is designed with reliability and safety in mind in order to mitigate the risks to Operators while ensuring efficient transfer. Through the integration of the Powder Pump with additional process components, we can provide a complete solids handling solution tailored to the unique requirements of your operation. Want to talk to a solids handling expert about your process needs? Contact DDPS online or fill out our Powder Handling Questionnaire to provide us with application-specific data for our process engineers to analyze and review.