Mixer-settlers are commonly used for liquid/liquid solvent extraction applications that typically operate in continuous mode.  Their name is derived from the two stages that make up the process – the first stage that mixes the two liquid phases together to accomplish mass transfer, and the second stage that uses gravity to naturally separate and settle the phases.

Mixer-settlers are not a new technology, but they are still a popular choice, even in the most modern plants.  They are especially practical for difficult extraction processes because of their reliability, flexibility, and ability to handle high volumes of product.  By “difficult extraction processes” we mean operations that involve products with challenging characteristics such as:

By connecting several mixer-settler stages in series and arranging for the phases to ﬂow counter-current to each other, a train of mixer-settlers can be adapted to handle the separation problems requiring more than 1 theoretical stage of separation.

The mixer and settler are essentially two separate components that are integrated to act as one system.  In the simplest of arrangements, the mixer vessel contains an agitator that is in contact with the feed solution (heavy phase) and solvent (light phase) to thoroughly mix the phases (if more contact time is required, the feed rate is decreased, or multiple mixer-settlers/stages are employed).  From there, a pumping turbine transfers the emulsion to the settler.  The settler, which is located downstream from the mixer to allow the heavy phase and light phase liquids to separate by gravity.  The settler may incorporate coalescer plates to aid in the separation of phases and break down of foam.  Coalescers can be several different configurations (plate / formed plate/ structured packing).  Additionally, the mixing and settling zones are separated by a weir, or barrier, to avoid back-mixing.  Once the process is complete, the liquids can be removed separately.

Operation parameters such as stirring speed, throughput, and settler internals can be adjusted according to the process criteria.  Diagram A below illustrates the simplest arrangement for an extraction process, utilizing a batch mixing vessel followed by a settler, and diagram B illustrates the flow pattern of a mixer/settler: 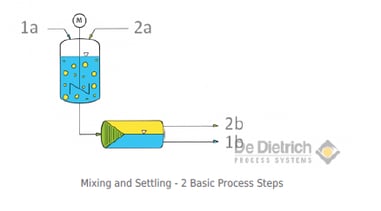 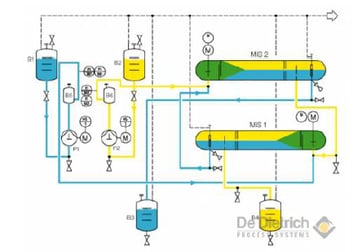 In the case of multiple stages (known as a mixer-settler battery), additional optimization of the process is possible since the mixers can be adjusted independently (i.e. the degree of dispersion can be selected).   If more than one theoretical equilibrium stage is required, they are usually connected in a counter current manner, as shown in this basic block chart of a counter-currently operated 4-stage mixer settler system: 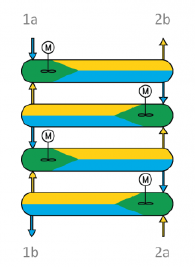 This staggering heights example facilitates the flow of the heavy phase from one stage to another while the light phase is being pumped.

As with anything, there are some design constraints that can make mixer-settlers impractical for certain applications:

Due to the simplicity of the process and available size range, mixer-settlers provide easy scale-up from lab trials and pilot plant systems to full-scale industrial operation.  De Dietrich Process Systems manufactures mixer-settlers in QVF borosilicate glass from DN50 up to DN1000, and in De Dietrich glass-lined steel for larger sizes. Contact us online or call 908-317-2585 to speak with one of our extraction experts and to get more information about DDPS mixer-settler systems and peripheral equipment.

The Modernization of Chemical Plants