Nowadays any mere mention of the word “vortex” might have you thinking about the Star Wars series and the windy, ice-capped planet that is affiliated with the Galactic Republic.    Chances are, though, if you are reading this post you are more concerned with the kind of vortex that is associated with mixing, especially if you have one in your process; it is the undesirable swirling effect that can occur in your glass-lined reactor if it is not properly baffled.

You may think of them as just another component in your vessel, but the truth is baffles are essential to proficient blending, solids suspension, and other mixing objectives.  If you had a square or rectangular tank, baffles wouldn’t be needed due to the geometry of the vessel walls; however, most glass-lined tanks are cylindrical and without some sort of baffle system, the velocities created by the agitator generate the unwanted vortex which amounts to an ineffective mixing environment.

So is the answer to attach any old baffle to the tank head to break up the flow pattern?  Maybe – if your process is installed somewhere in the Mid Rim region of the Glythe Sector (I would imagine that the general laws of physics don’t apply on planet Vortex).  But here on Earth, the overall configuration, including baffle design, quantity, and installation must be considered to maximize the efficiency of the reactor.

There are various ways to promote a better mixing pattern through the incorporation of axial and radial circulation.  If a tank remains unbaffled, a mixer can be mounted off-center or at an angle.  In some cases, this provides a suitable mixing solution; however, this method of mixing produces unbalanced loads that can have a negative impact on the agitator shaft.  Additionally, the viscosity and specific gravity of the product can require a more rugged gearbox and bearing which increases costs.  For these reasons, installing baffles is typically the preferred solution to improve mixing.

Baffles come in many variations and based on your unique process objectives and product characteristics one design may be more suitable than another.  For the most part, though, baffles have a long, flat shape and are either nozzle-mounted via the top head of the reactor or mounted to the wall of the vessel.

Traditional glass-lined baffles are designed to hang from the top head of the vessel’s flanges to ensure the integrity of the vessel lining.  While this offers effective mixing, there are limitations and inefficiencies created by this arrangement.  Since mounting flanges are needed for process monitoring, insertion of cleaning devices, and the introduction of reactants, no more than two baffles are typically used due to the limited space in the head.

The wall-mounted baffle design (which DDPS calls OptiMix) solves the issues faced by traditional baffle installations by welding the reactor wall prior to coating all steel surfaces with glass.  This new configuration employs three glass-lined baffles, rather than the single baffle used in conventional glass-lined equipment.  This results in many advantages, including:

The combination of these improvements results in better chemical reaction rates and an overall increase in productivity.

Recently, the range of the OptiMix reactors has expanded to provide improved heat transfer and reduced processing times.  This new design, OptiMix-HE, circulates the thermal fluid contained in the half-coil reactor jacket through the baffles.  This results in an increased heat transfer area of 25% or more enabling better homogeneity, faster thermal management, and shortened cycle times.  The graph below shows the heat exchange comparison between a reactor with one nozzle-mounted baffle, the OptiMix reactor, and the OptiMix-HE reactor.  The test was performed in HemiCoil jacketed 300 gallon GL reactors at an agitation speed of 110 rpm with sulfuric acid and 300°F thermal fluid. Baffle design, configuration and mixer mounting all have a significant impact on the mixing process. Although there isn’t a single solution that provides optimal results for every application, for the majority of processes, wall-mounted baffles carry out the mixing objectives most proficiently.  Unlike Luke Skywalker, if you haven’t harnessed the power of “the Force” within your process and are dealing with vortexes and other mixing issues, contact DDPS and we can help with an agitation simulation to look for an alternative option to your current mixing system to help optimize your reactor’s performance.   And the good news is you don’t need to get a new vessel to start experiencing the benefits for OptiMix.  OptiMix baffles can be added to your existing vessel during reglass service.  Contact DDPS for more information. 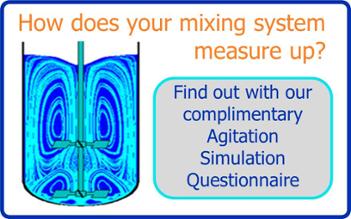