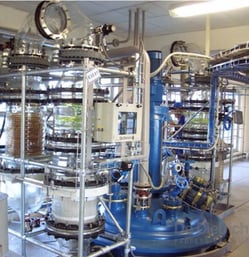 Reaction and separation in one single apparatus

In many processes, reaction and distillation occur consecutively within the same equipment; starting materials react to the desired products and these products are then separated by distillation.

The combination of glass-lined steel reactors with distillation attachments made of borosilicate glass 3.3 provide an ideal solution for the production of highly refined and high-purity products due to the material of construction corrosion resistance and inertness.  Glass overheads are suitable to carry out distillation in reactor systems up to 2,500 gallons.

In addition to disillation, vessel overheads are also suitable for different processes, such as boiling under reflux, hydrodistillation, and rectification.

The plants are operated at atmospheric pressure or under vacuum mostly in batch but also in continuous mode.

The overhead components (condenser / heat exchanger) can be flexibly connected via PTFE bellows directly to or laterally offset from the vapor outlet of the reactor. Vessel attachments are mounted in separate structures next to the vessels. The structure can be adapted individually to the available space conditions and leaves the required free space on the vessel cover for the stirrer unit, filling neck, illumination, sight glass, safety valves etc. Since borosilicate glass 3.3 is transparent, the process can be visually controlled at any time improving the safety and reliability of the production.

The level of instrumentation and controls is customizable to the process and/or user requirements.  Illustrated in the diagrams below are basic instrumentation required/recommended for each arrangement.  These are various design examples for different applications:

Boiling under Reflux and Distillation with Coil Heat Exchanger

This example shows an overhead with uprising condensation. In this arrangement, the vapor moves upwards along the heat exchanger and condenses.  The down flowing condensate leaves the condenser at its boiling temperature.  Depending on the of/off position of the valve above CO1, the condensate is either guided backwards into the reactor or withdrawn. 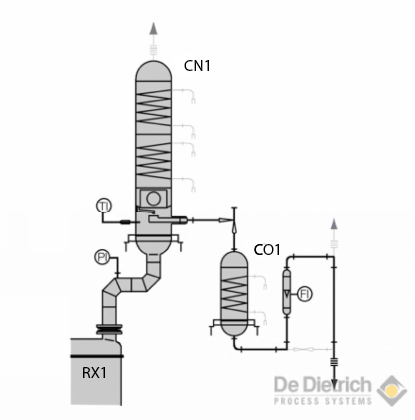 Boiling under Reflux and Distillation with Shell & Tube Heat Exchanger

The same process funtionality can be accomplished with a shell & tube heat exchanger. They can also be installed in an horizontal position if minimum headroom is required. Higher heat transfer rates a bigger range of sizes available make this arrangement option preferred for larger sized reactor systems. 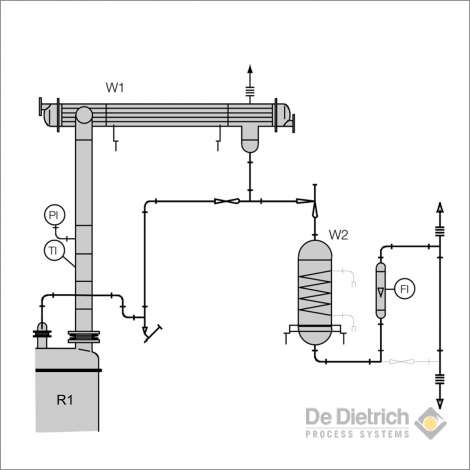 In addition to the overhead unit described above, this setup includes a phase separation vessel for the distillate. This arrangment is typically used when the distillate forms 2 phases as distillates (e.g. for water removal during esterification, hydrodistillations and heterogenous azeotropes).The phase separator permits the adjustment of the interphase and the separate withdrawal of the light and heavy phase. The light phase and the heavy phase can selectively be guided back into the vessel or withdrawn. 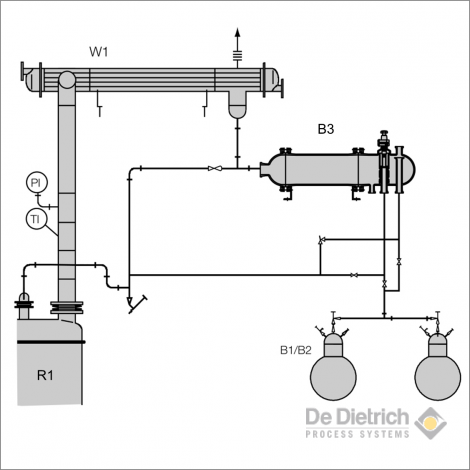 In this setup the vapors enter the condenser (CN1) and flow downwards along it.  The principle of descending condensation means that the condensate can run off with a temperature below its boiling point.  The condensate can then be either withdrawn or sent back to the reactor.

Additional alternate receivers are integrated, so that the distillate can be taken off during vacuum distillation. 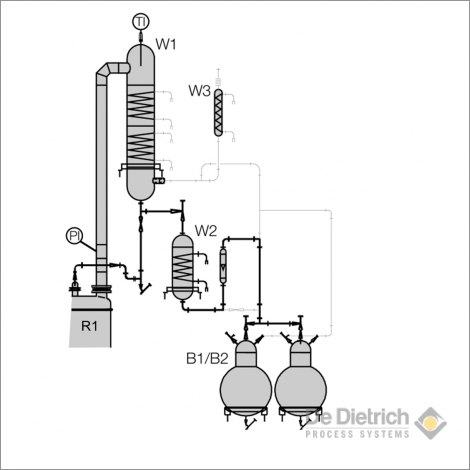 Using a packed column with a reflux divider between the condenser and the reactor, volatile substances with closer boiling points can be separated by rectification from each other. The column height and the type of column internals are fixed in accordance with the separation problem and the available height.

A wide range of column internals are available in corrosion resistant borosilicate glass or PTFE, including:

Depending on availble height and required condensing capacity either tube & shell or coil type heat exchangers are used. 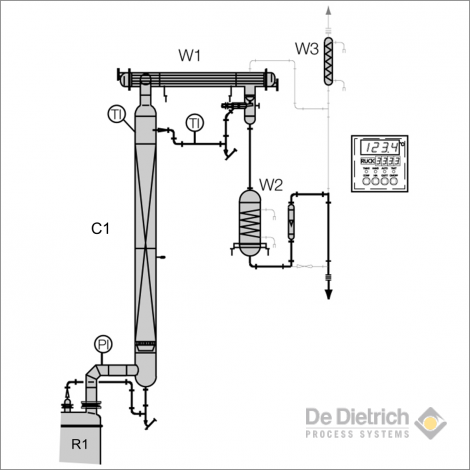 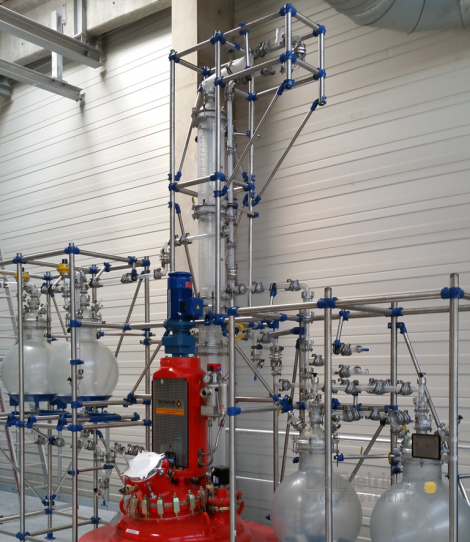 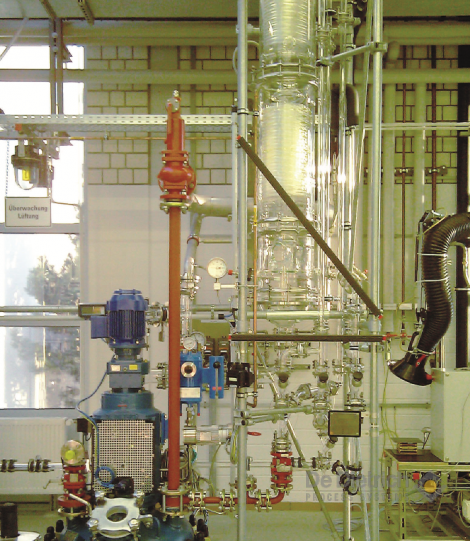